What is Vampire Mining Attack? – Everything you need to know in Sushiswap Saga 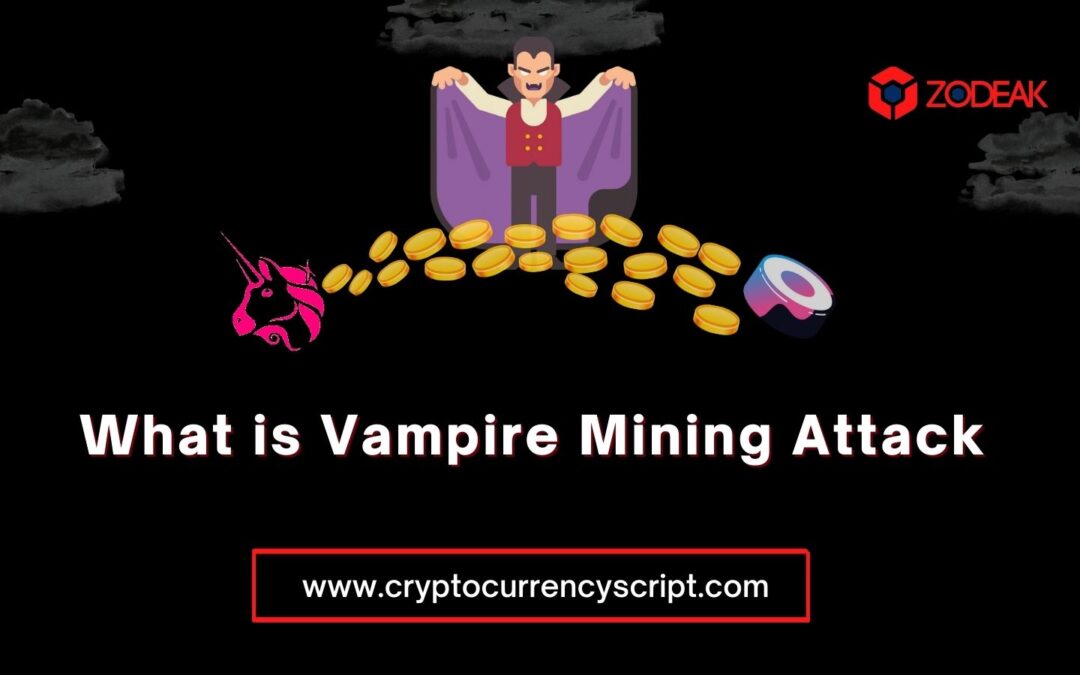 In the wild west of the Cryptosphere, a unique technique appeared from the gloom, that is Vampire Mining Attack. Quite Scary, Right! You may ask what is this?

This article will guide you on what is Vampire Attack or Vampire Mining? How does it work on DeFi? and much more.,

In the Ethereum Ecosystem, Uniswap is the world’s enormous Decentralized Finance(DeFi) platform which contains most projects. And, it is a completely Open-Source Protocol. In August 2020, Chef Nomi – an anonymous Developer who forked the Uniswap platform code to build a competitor clone that is – Sushiswap. Don’t think that the visuals of kitchenery visuals like chefs, sushi, and forks were just a meme.

Sushiswap is a thunderbolt rod event that made billions of dollars worth of value very quickly in the DeFi Marketplace. This Thunderbolt rod strategy is termed “Vampire Attack”. In the Blockchain Enterprise, this strategy is getting a case study like market forces and competition in the emerging DeFi arena.

What is Vampire Mining/Vampire Attack?

The process of the exhausting liquidity from Uniswap to SushiSwap is dubbed or termed as a “Vampire Attack” or “Vampire Mining.” The strategy involves forking an already thriving open-source fee-producing protocol. These make slight adjustments to better incentivize participants in the new protocol where the possibilities exist.

What Exactly is the Vampire Mining Attack in DeFi?

Before understanding the concept of Vampire attacks, First, you must know the basics of Automated Market Makers(AMMs), this is one of the types of Decentralized Exchange(DEX). This AMM Model uses Liquidity Pools, which represent collective pools of tokens that are locked with the help of Smart contracts. This helps you to simplify permissionless assets trading.

Also, these AMMs have adequate liquidity and are attractive to traders because they can perform more extensive and more rapid transactions with lower fees. When forking the Uniswap code, Nomi realized that liquidity was crucial to creating SushiSwap a success.

When it comes to Uniswap, It would be difficult to incentivize users to provide liquidity to a new platform. Because of this, Nomi established that SushiSwap would present users with two rewards for rendering liquidity:

Introducing a robust incentive mechanism for liquidity providers is the fundamentals of liquidity vampire attacks. Then, it is just a point of time when to anticipate massive liquidity to your newborn “forky” project. Such actions are named migration mining.

Migration Mining – simply called MM is a way of gaining liquidity to a liquidity relying protocol out of other protocols.

Two primary conditions that lead to a successful path for Migration Mining protocols are the Long lock-up Period, and the Migration Process itself.

The process of Migration are as follows:

-> Carries his liquidity out of the protocol A

-> Deliver this liquidity to protocol B

-> Lock up this liquidity for a particular period

-> Earn a reward in protocol B tokens for liquidity providing.

The lock-up period is important in terms of Migration Mining and Vampire Mining in DeFi. Because it assures long-term lockdown of liquidity within protocol B. This allows it to preserve it until competitor A will not be conquered.

A simple vampire attack in DeFi relies on “fork protocol”. Protocol B has its own token, while protocol A doesn’t hold it. In this case, the execution of such attacks on liquidity is completely simple.

In the Advanced model of Vampire Attack, both Protocol A and B contain their own token. In advance, malevolent project B initiates to lend as many protocols A tokens as it can. Then it begins to sell A tokens while vigorously buying its own B tokens on the market and establishing a loftier price for token B by this.

Sushiswap is one of the most polarizing projects in the DeFi Sphere. These experiments like this are much required in our developing industry and they will amplify the whole environment and create it more flexible in the future.

If you are interested in developing your own DeFi based protocol like Sushiswap, Zodeak provides you Sushiswap clone script that includes advanced peculiarities which are similar to Sushiswap.

Want to get more information about our DeFi Services, ask our business experts via,

Connect with our Experts