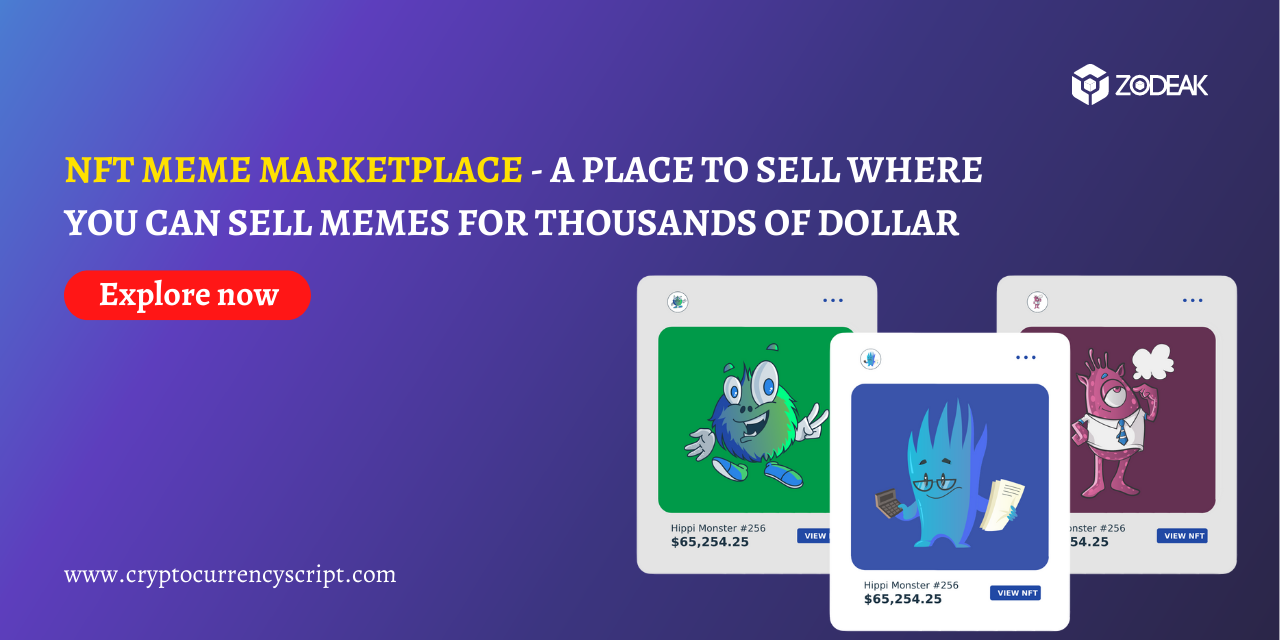 Every social media user has come across memes at least once when they are online. A meme is nothing but a creative work developed especially to make the audience laugh.

Nowadays, memes reflect each and every situation in our life. Memes are used globally irrespective of categories like sports, cinema, religion, politics, etc with the intention to make the audience laugh.

Entrepreneurs decide to blend popular memes with robust NFT to create Meme NFT Marketplace. If you are interested you can reach out to Zodeak’s knowledgeable blockchain and cryptocurrency development team. Our professionals are skilled in creating NFT-based memes on strong Ethereum token standards like ERC721 and ERC1155. Moreover, crypto-collectibles are integrated to sell their memes on the leading NFT marketplace like Sandbox, SuperRare, Solible, Rarible, OpenSea, and Axie Infinity.

Quick research about the NFT marketplace for Meme in the current crypto market:

Recently, the popular Disaster Girl meme has been sold for an extraordinary price $500,000 on eBay. In 2005, the first meme was released on social media. A popular 3F Music studio in Dubaichas obtained it. The girl Zoe Roth who acted in the meme used this money to make payments for his student loans and also make a charitable donation.

Some of the other famous memes with the crypto-collectibles theme are Scumbag Steve, Clarinet boy, Bad Luck Brain, and Success Kid. The cost of these memes is several thousand pounds and most cryptopreneurs are interested to buy them.

Meme creators are most-satisfied. A bidding war that happened at the time of the auction taking place on the NFT marketplace has raised the price of memes rapidly. As the buyer experiences positively, even though the outdated memes which were published in 2000 and 2010 have increasing demand.

The Overly Attached Girlfriend meme was sold as an NFT on the Foundation Online marketplace for an extraordinary price of $411,000 dollars. The meme includes a close-up photo of Laina Morris which was taken in June 2012.

How do stakeholders benefit from selling memes as crypto collectibles?

In Addition to a standard stream of income for meme creators, NFTs facilitate the monetization of all content on social media websites. But all meme creators can’t easily convert their creation to a cryptocurrency collectible and sell it.

So there is a need for professional meme managers to handle all aspects such as minting NFTs, marketing, running the auction, and processing payments.

With a significant count of likes, followers, and shares for their work on several social media platforms, content creators gain more traction for their memes.

Influencer marketers are also using the benefits of memes to promote several goods and services from well-recognized national and international brands.

What are the issues faced by Meme-Makers while selling their work as NFTs?

One must be aware of problems such as copyright infringement and duplication which destroys the value of the original work. In some cases, whenever the blockchain network gets congested, the meme creators have to pay high gas fees. This problem is solved by the popular Ethereum blockchain network which switches PoW to PoS consensus mechanism provided by Ethereum 2.0.

The meme creator has to confirm whether the NFT marketplace is concealed with the law such as GDPR (General Data Protection Regulation) related to privacy and security.

The content creators have to know about the percentage of revenue for selling the meme on the meme NFT marketplace. It incorporates numerous expenses such as registration fees, minting fees, transaction fees, commission for every sale on a meme, additional costs for private sales, and selling numerous memes in a single auction.

How much does it cost to create an NFT marketplace for a meme?

Memes have a great selling value while transforming memes into NFTs. Nowadays, most companies are ready to use memes to showcase their product’s benefits and increase their product image. Meme creators have the potential to grab a global audience easily by selling their unique creations on various NFT marketplaces at competitive prices.

Undoutfully memes are the biggest source of entertainment and social media users feel relaxed and delighted when they see them on their content feed. Memes act as a medium to take creators close to their target community.

NFTs had made multiple meme-creators millionaires overnight. The creators have full rights to decide about the kind of content, the value of the content, and the promotional strategy by removing intermediaries.

In the future, meme-based NFTs would depend on the volatile nature of the crypto market, enhanced smartphone usage, level of creativity, privacy and security problems, and the updating trends in the social media world. Soon shake-hand with Zodeak to establish a meme NFT marketplace in the crypto space. We, NFT meme marketplace development company, are ready to give you an NFT meme marketplace where you can gain profit by allowing your users to sell their meme-based NFTs. 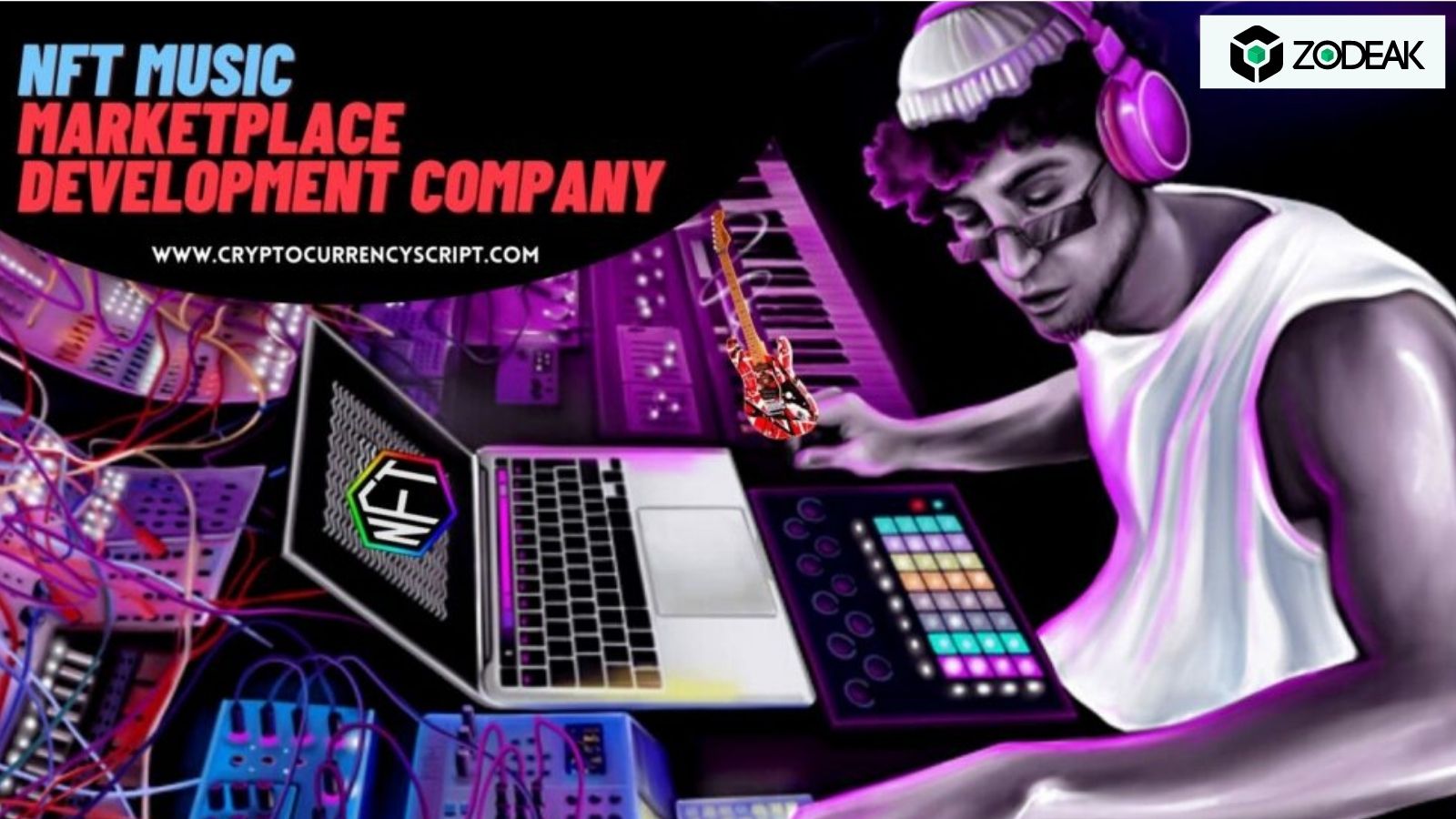 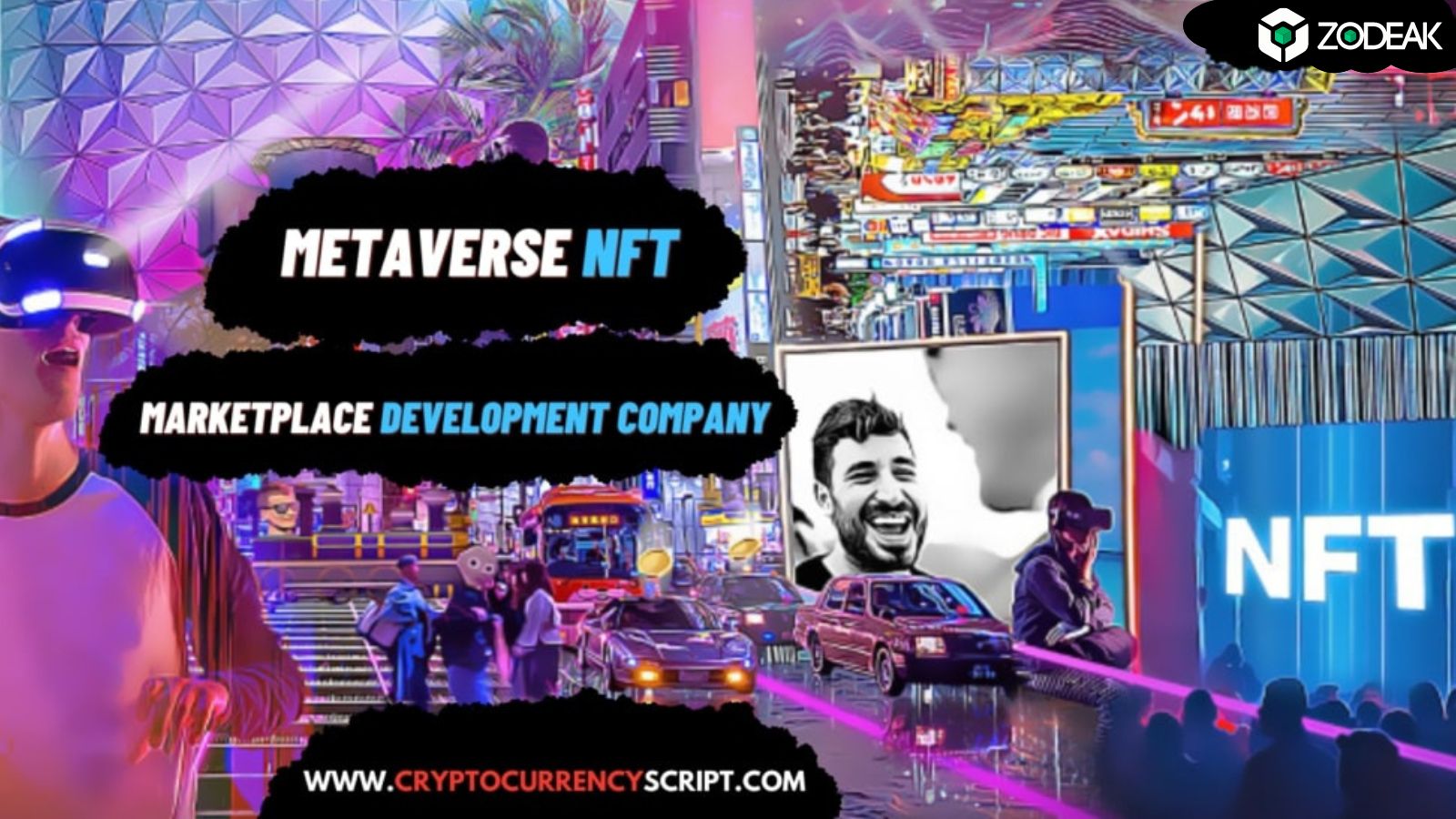 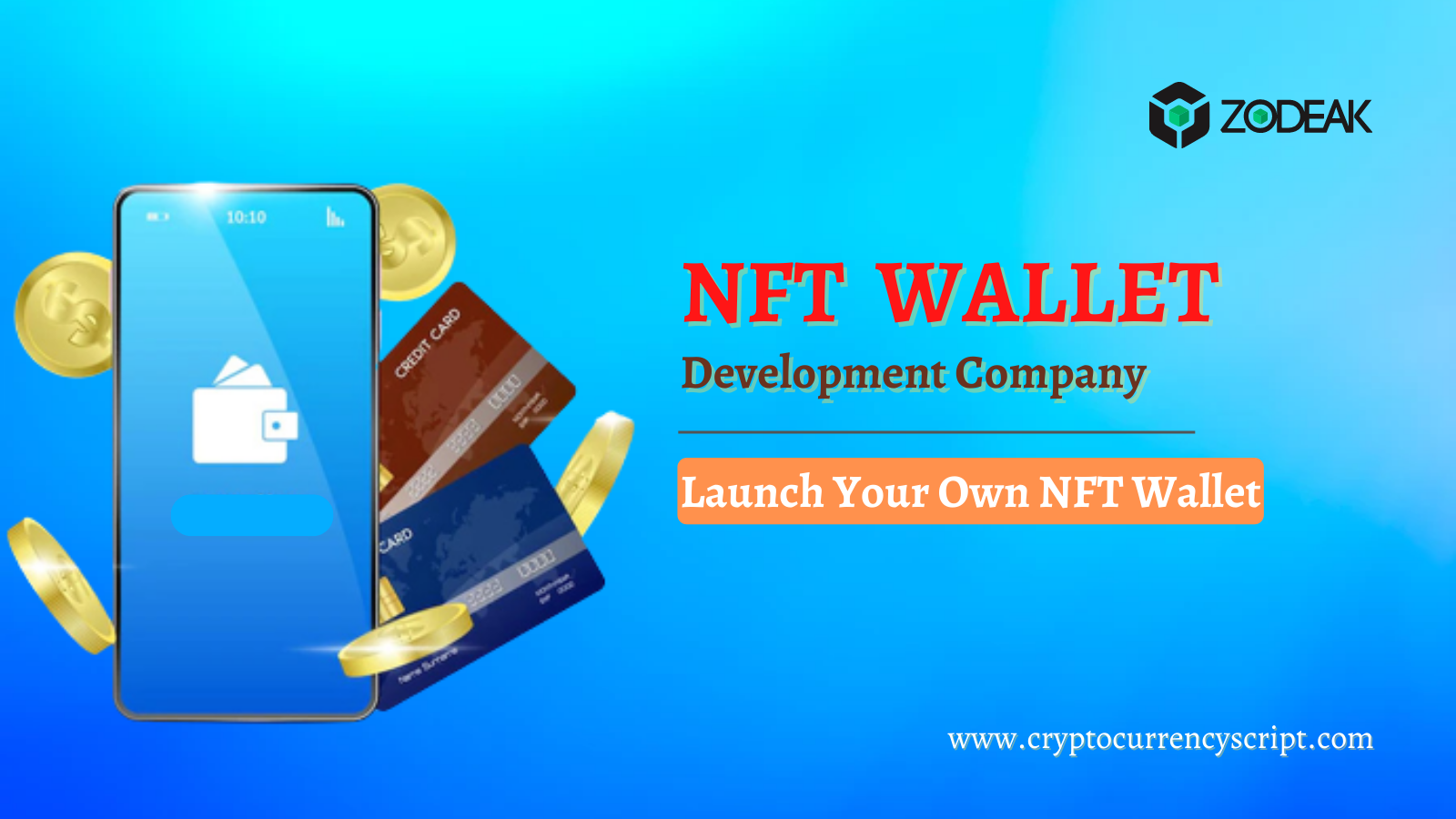 NFT Wallet Development Company – To Launch Your Own NFT Wallet 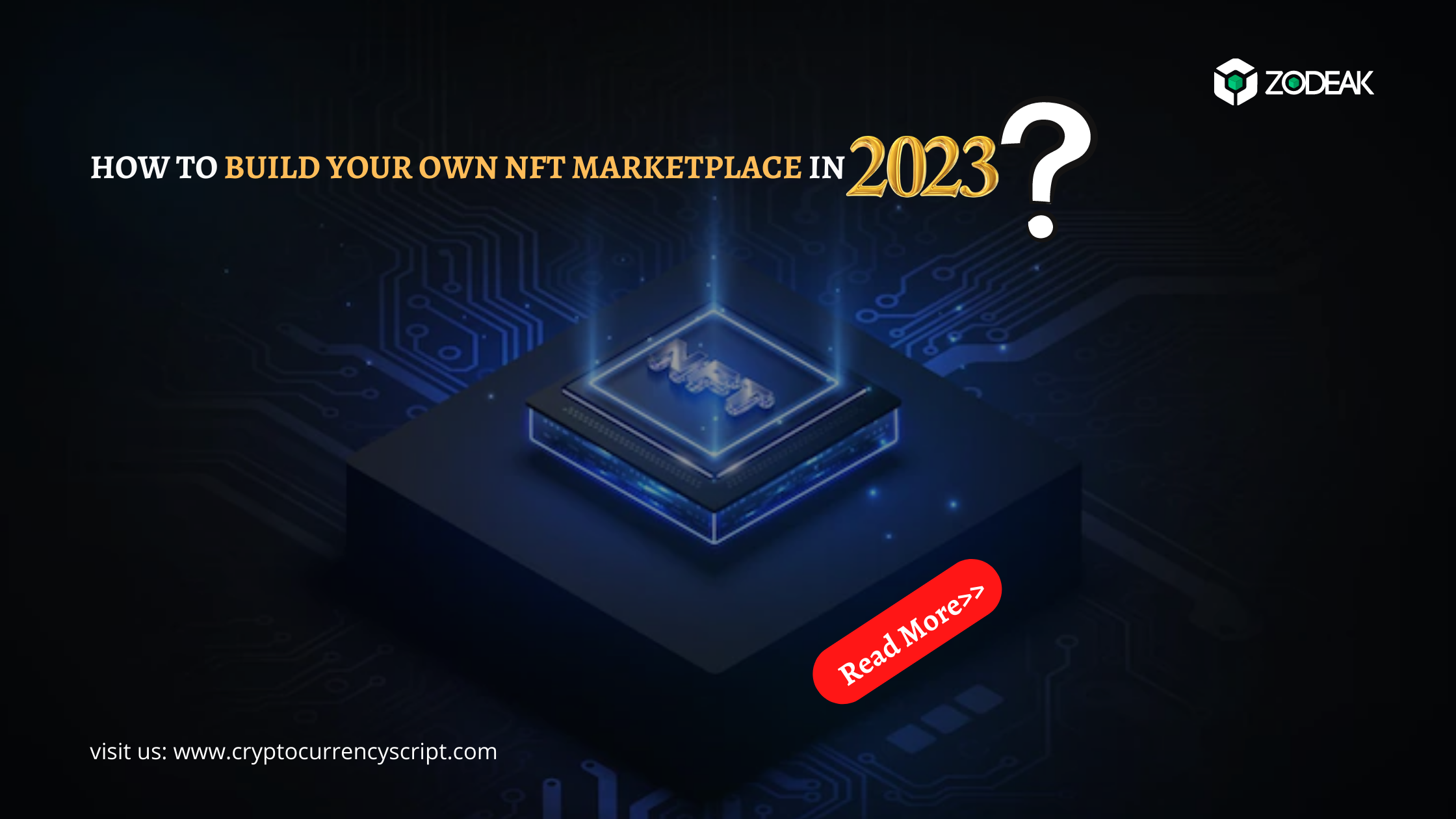 How to Create your Own NFT Marketplace in 2023?